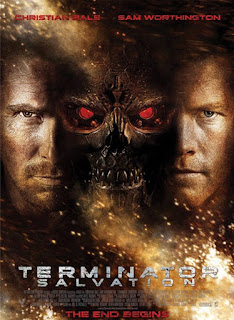 After watching Terminator Salvation, I was reminded of a skit that was basically a parody of dating services that used to play on MadTV called "Lowered Expectations." It's always frustrating to sit down to see a movie you've heard countless great things about only to be disappointed. Currently enjoying a rather deplorable 32% fresh rating on Rotten Tomatoes, Salvation didn't have a whole lot going for it as I sat down and pressed play.

While not the pinnacle of the Terminator franchise by any stretch, Salvation certainly was not the worst either. John Connor, now played by Christian Bale, still stuck in his gravely Batman voice, is joined by some new and old friends as he attempts to lead a small band of nuclear holocaust survivors against their machinist overlords. The funny thing about this film is that while the first three in the series focused on the Connor family in their dealings with their pending fate, this film turns more to Marcus Wright, played by Sam Worthington on the upcoming Avatar.


The film seems more of Marcus's explosive introduction to the bleak future, coming to terms with his "state of being", and trying to redeem himself for his previous indiscretions. It makes for an interesting enough story but Connor is pushed to the background, making his future importance seem trivial. This not only reduces Bale's screen time, Connor's story time like his pregnant wife and his defiance to the resistance leadership are half-baked and unfulfilled. I'm not sure if Bale decided to overact in light of the script's direction but I certainly have seen better work from him.

Taking a turn from the endless nights in skull-covered metropolises from the first two films (and possibly the third which I don't really remember), the landscape in the film is bright but utterly destroyed and bleak in a true end-of-the-world looking scenario. As abandoned cars litter the sides of the roads and burnt up buildings house our friendly resistance fighters, the almost bleached out photography looks more of a sequel to The Stand that to the first few films. However, the more open desolate fields lead a fan to wonder, where are the roaming armies of T-600s(?) and multiple HKs constantly seeking the remaining humans that were prominently showcased in the beginning installments. It almost seemed that the humans were quite balsy with their large compounds covered by massive floodlights, random explosions, and normal back and forth movement during the day, seemingly without fear of the machines.

I hate to make a review of a movie comparing it against the previous films, but not only is Terminator a franchise that spans the really awesome (T2) to the not-so-much(T3), but Salvation also has many references to its predecessors as well. From Linda Hamilton's recorded tapes to John, the Guns n Roses song featured in the second, the obligatory "I'll be back" and "Come with me if you want to live" statements, and the showdown in an industrial factory with apparently spark making machines and molten magma, this film most decidedly knows where it came from.

The problem, I fear, is where it is going. With its parent company in financial woes, the series could be picked up by another company or abandoned all together. This could lead some of the stronger elements of the series such as Christian Bale to ... bail on the project if it languishes in development hell or for whatever company makes the next entry to bang it out in favor of a buck, rather than the development of the series.

That sad, regardless of all the negative reviews I read when the film premiered over the summer and even recently with its release on video, I was rather surprised by Terminator Salvation.