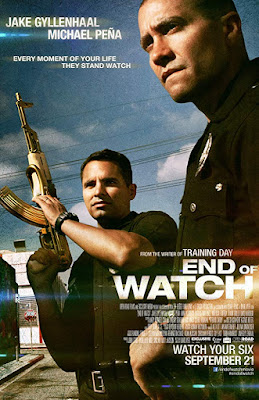 If you ever wondered if the 'found footage' genre would graduate from horror into loftier pursuits (Chronicle notwithstanding), End of Watch might be the film for you. At least, sort of. I was sold on a gritty cop film starring Jake Gyllenhaal and Michael Peña with the aforementioned style but the end result was less than impressive. Imagine COPS: The Movie with attractive actors, love interests, and a big bad in the form of a very shallow drug kingpin and you have the idea.

Gyllenhaal and Pena are two almost-rogue LA cops who manage to get entangled into more shootouts and busts than Riggs and Murtaugh with even more chatty banter but less characterization. As a result of them sticking their noses into a drug war, the two are (eventually) drawn into the seedy underbelly of Los Angeles that permeates almost every other film by David Ayer. Like the "found footage" angle that is more easily explained by having an invisible cameraman, the film suffers from having goals too lofty for what the rather trite material allows as it tries to explore deep and troubling issues in an urban area but is sabotaged by the hollow characters and sheer predictability.
Posted by Puck at 11:45 AM No comments: