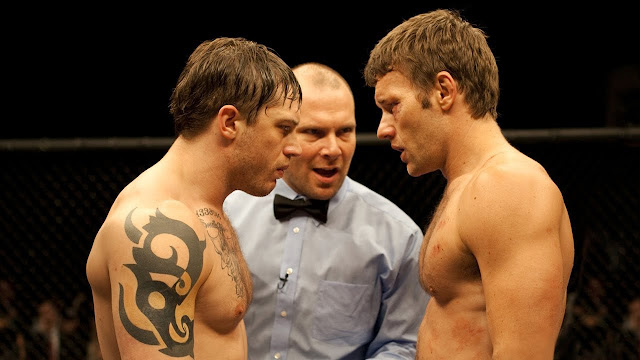 Why did I not have a desire to see Warrior when it was in theaters? The stellar-looking cast including Tom Hardy and Joel Edgerton didn’t hurt but perhaps it was the seemingly overwrought story of two estranged brothers who each are fighting against each other for whichever predetermined important reason. (Was that even supposed to be a surprise in the final act? Because it’s all over the trailer!) Or perhaps Warrior didn’t strike my fancy since I am hardly a sports fanatic even though the brutality and testosterone-y aspects of MMA are pretty cool. Yet, all it took was one of my colleagues saying “You’ll want to tackle someone while watching it” that got me on board. For the record, he was right.

Even if you are Amish or have short-term memory problems, or have otherwise not seen the entire narrative spoiled in the previews, the story in Warrior is so expected that you can see it coming from two summers ago. Hardy plays Tommy Conlon, an angry and bitter man who has suffered through many hardships in life, many from his estranged father Paddy (Nick Nolte) who was drunk and abusive before finding religion and sobriety. Edgerton plays Brendan Conlon, brother to Tommy, who left his family at sixteen to be with his would-be wife. Brendan has not seen Tommy since then and is still hesitant about any contact with his father.

Tommy’s past is a mystery since he is emotionally withdrawn and does not talk about it to anyone, especially his prying father. We learn in bits and pieces about him fleeing with his mother only to watch her painfully die later on as well as his heroics in the military and a promise made to the widow of one of his fallen compadres. Brendan on the other hand has a beautiful wife and two girls but is in a bad financial situation to the point that he is about to be removed from his house without a substantial amount of money. With that, both brothers sign up for a MMA tournament against fourteen other top fighters in the world for a chance to win $5 million.

It is odd that a film like The Fighter, which is good but very predictable, can be nominated for Best Picture along with a slew of other awards and the only Oscar nomination for Warrior goes to Nolte. Granted, Nolte is great with his performance as the outside man desperately seeking redemption from his remaining family. He carries the knowledge of his past failures and is humbled because of them but both sons mostly cast him aside except for Tommy who clearly specifies he needs Paddy as a trainer and nothing else. Hardy also turns in a criminally under-appreciated performance as Tommy who hides years of physical and emotional trauma behind a steely facade with nothing but rage and aggression poking through when he is in the cage.

Rounding out the trio of emotionally scarred Conlon men is Edgerton as Brendan who I first noticed and became a fan of from Animal Kingdom. Edgerton’s character has a good amount of time devoted to him but his character lacks the stress of Tommy or the rejection of Paddy rendering Brendan the more plain character out of the three. He still does a remarkable job though as Brendan is the underdog throughout the process and is given the most material to sympathize with. For most of the film, Tommy comes off almost as an ungrateful punk who doesn’t give a damn about anyone so connecting with him is a bit more difficult.

Even though the story seems a tad unoriginal, co-writer and director Gavin O’Connor infuses the film with so much energy that I feel comfortable in saying that you too will want to tackle someone at parts of the movie. The fight scenes, of which there are many, never feel overly staged or choreographed and the typical handheld camera shots are not overdone to risk confusing you as to what is going on. Punctuating the fight scenes are conversations between Tommy and his father, Brendan and his wife, and so forth but those don’t feel like filler or padding the way some sports movies throw in “heavy” scenes. Even if you are not a fan of martial arts or sports movies, it is close to impossible to watch this film and not get teary-eyed when appropriate or otherwise invested in the characters. I haven’t seen a lot of the heavily lauded films from last year so I can’t proclaim this is the best but I am disheartened that this top-notch drama did not receive a bit more recognition.v
Posted by Puck at 8:47 PM No comments: 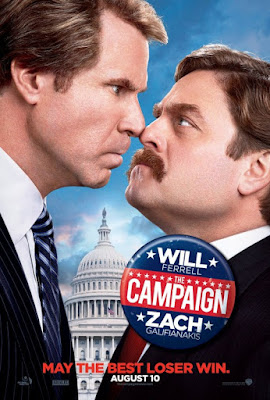 In spite of the cast and crew, I can’t say I was expecting much from The Campaign. Sure, Will Ferrell is still arguably one of the best comedic actors still working but his recent output has been inconsistent. Likewise, Zach Galifianakis has had a few good roles but is largely coasting on being the weird, lovable lunk that John Candy may have played twenty years ago.

In the film, Farrell pretty accurately portays Cam Brady, a North Carolina good ol’ boy who is running for Congress unopposed. He’s suave and well-spoken but doesn’t actually believe a single thing he says other than he wants to be congressman again. In other words, he nails a typical politician with ease. After Brady leaves a lewd answering machine message at Jack McBrayer’s house, the Motch brothers (Dan Akroyd and John Lithgow) decide to throw a monkey wrench in his campaign by backing Marty Huggins (Galifianakis), a simpleton with no political experience who is easily swayed into poor decisions by money and power. In other words, Galifianakis is also dead-on with his portrayal.

I’m typically a sucker for end-of-the-world type stories so I was curious about Seeking a Friend for the End of the World even with an apparent lovey-dovey relationship courtesy of writer/director Lorene Scafaria. While I haven’t seen most of them, Steve Carell has successfully headlined a number of films but he just seems uncomfortable in this romance/comedy/drama hybrid. Granted, his character is meant to be shy and reserved but it’s a wild change from most of what he’s most familiar from.

His screen partner Keira Knightley is delightful and the two leads share a good chemistry. But, and possibly by design, their relationship never feels as genuine as it should as the two attempt to cross New Jersey apparently (bleh) on the eve of the apocalypse. There are some funny moments as well as some serious ones about the reflection of life and love but because the film never really commits to which genre it wants to be in, things are less impactful. Until the world comes to an end that is. 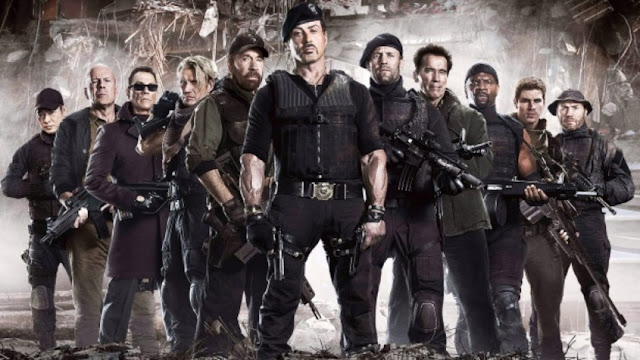 If you recall from my review of the first film, I wasn’t a huge fan of the first washed-up action star reunion show. It had its moments and is decent enough for a soulless, mindless popcorn flick but nothing more. As such, I wasn’t expecting much from its follow-up. Surprisingly enough though, The Expendables 2 is a bit goofier and a bit more over-the-top but it is a nice entry into the random action film category.

The idea of a sequel to the first film is not a hard sell since Sylvester Stallone and his band of mercenary misfits are designed to be an autonomous group traversing the world to kill tons of people and woo women. This time around, Stallone’s Barney Ross (did he have a name in the first? I didn’t catch it at least) is tasked by Mr. Church (Bruce Willis) to retrieve a sensitive package from a downed plane. Even though Church describes it as a cake-walk, things are anything but once the villainous Jean-Claude Van Damme shows up to intercept the package. Oh, and that character who says he’s not cut out for this line of work and will leave the team at month’s end? He’s rendered dead by Van Damme giving the rest of the plot a forward boost.

Random Movie: I Still Know What You Did Last Summer (1998) 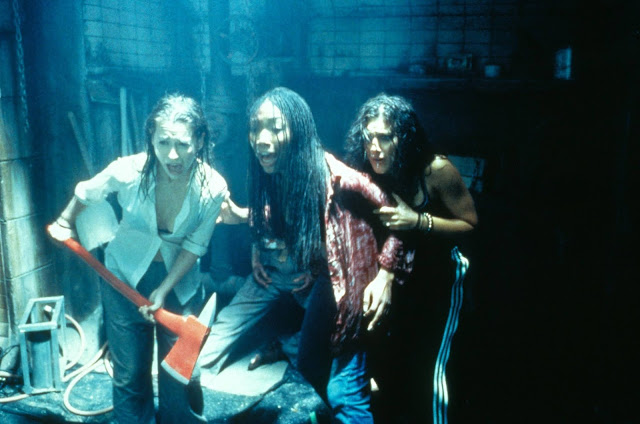 This movie is terrible. Of course, this isn't a secret or a new revelation I've come to in deducing how mind-boggingly lazy this film is. In fact, it's so bad that I can safely classify it with The Happening which induces similar headaches and constant facepalms while maintaining its ability to make me want to suffer through it even though I know I'll hate myself afterward.