When this movie was first announced as a prequel to the John Carpenter's The Thing, arguably one of the best horror movies ever made, I felt an odd sense of relief knowing that it wouldn't be an out and out remake. Of course, framing this as a prequel to a classic film creates its own problems as it effectively paints the film into a corner at the risk of alienating a huge portion of the audience that would get up in arms if it does not tie into the original. So, The Thing '11 is almost like a cinematic damned-if-you-do-damned-if-you-don't scenario. Surprisingly though, it turns out pretty well.

Maybe it was explained in Carpenter's film (or the preceeding film or the novella they all are based on) but why are all these people in Antarctica in the first place? I get that they are research teams but what are they researching? The balmy conditions outside? The mental stress of being cooped up in a reinforced cardboard box for months at a time? Alien mating calls? Whatever the reason, paleontologist Kate Lloyd (Mary Elizabeth Winstead) is convinced by her mentor Sander Halvorson (Ulrich Thomsen) and his assistant Adam Finch (Eric Christian Olsen) to head to beautiful downtown South Pole to investigate the discovery of a crashed spaceship as well as its passenger who managed to escape before being frozen in ice.

The Americans head back to the Norwegian research camp with an occupied block of ice in tow to research to creature but due to the impatience of Halvorson and the ineptitude of one of the Nordmenn, the monster escapes and most of what you remember from Carpenter's film is replayed, this time with a bunch of bearded, underdeveloped characters along with Joel Edgerton and Lost's Mr. Eko (Adewale Akinnuoye-Agbaje) for good measure. This is the first stumbling block for Eric Heisserer's script as there are far too many characters who exist only pad the body count. The actors you recognize are given at least a glimmer of characterization but not so much for the foreign fodder.

But who cares? Yeah, even though good horror movies have characters or villains that stand out, it's not a requirement in the genre, right? Well, the story is really nothing special either since other than the first few scenes, after The Thing is unleashed it mirrors a lot of beats from its older brother. The subgenre standards of paranoia and sense of distrust are certainly not groundbreaking but I'm a sucker for these "the killer is among us" type of films. The issue again comes down to the denizens of the story since it is a reasonable expectation that Winstead will be the final girl, either Olsen or Edgerton along with her, and the other notable actors saved until last to die so you know that The Thing! is more likely to be rotate among the other random people in the camp.

In pretty much every review of the 1982 model, the effects are called out as Rob Bottin performed miracles out of gunk and goo and whatever else to stand alongside the actors. It is reported that Matthijs van Heijningen Jr. used mostly practical effects with CGI just to augment or replace what didn't work, nothing noteworthy stood out as real like a self-dismembering head. Granted, the look of a lot of the effects, including a two-faced monster toward the end, look cool but still have a sheen of computer wizardry so they are not nearly as impactful.

In spite of Hollywood's proclivity to churn out remakes and reboots galore, it is difficult to completely divorce them from the predecessors and even more so here. Heisserer and Heijningen make a point to directly tie into Carpenter's film which is neat in some aspects like the aforementioned two-faced monster and even the layout of the Norwegian camp that is glimpsed before. But for as cool as some added history is, there are just too many moments that are repurposed for inclusion here such as a blood test to reveal the monster. I almost wonder if a straight remake would have turned out better but then again, all of these constant homages would have felt even less genuine without that thread between the two.

I know the overall tone of this review is negative but in fact, The Thing 2011 is a pretty decent monster movie. It's not the best and nowhere near as great as Mac and the gang's adventures but with some decent performances, even from the no-names, and a mostly tense atmosphere, you could do far worse. I feel the filmmakers could have done more different instead of falling back on homaging the original so much but if you are going to copy, it's best to copy something that was awesome the first time around.
Posted by Puck at 6:00 PM No comments: 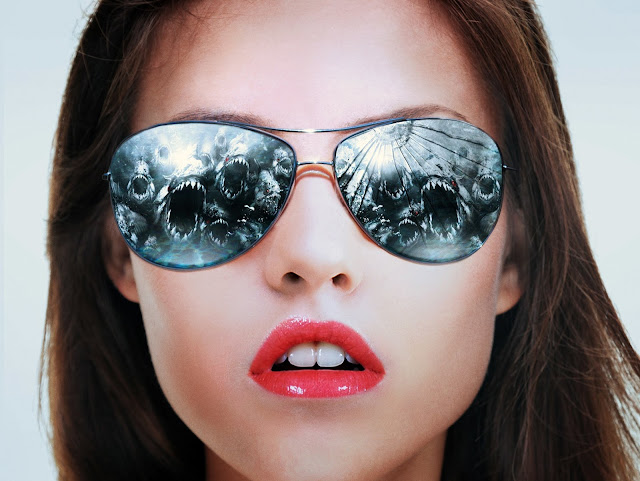 Every generation has its defining movie premiere that lives in the annals of history: The Godfather, Star Wars, Weekend at Bernie's. Yet, #pbf and I were giddy with excitement late on a Thursday night in August 2010. The midnight premiere we were gearing up for: Piranha 3D. Sadly, Dimension Films in all their wisdom denied us a repeat event when Piranha 3DD was shuffled around the release schedule only to end up in a few dozen theaters. Dumbasses.