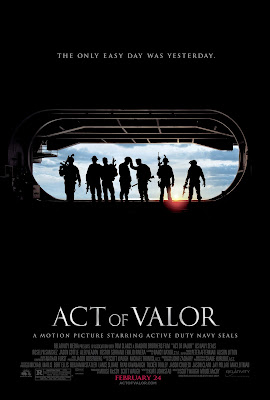 On paper (and in the ads), Act of Valor sounds like an interesting premise: an action film shot using Navy SEALs in place of actors. After all, if they can portray even half of the cool stuff the general public even knows about, it should kick ass, right? Eh, sadly not so much. Of all movie genres, it doesn't take too much for me to like a military-based film probably much like the rest of the world enjoys the hell out of military-based video games. Mostly in these films there is a decent story, great action, and overwhelming sense of humility for even the fictional military members doing things that I'd rather not have to think about. They are almost cathartic that way.

Act of Valor on the other hand fizzles out almost from the start with a heavy-handed narration from one SEAL to (presumably) the son of another fallen soldier. In the next scene, we meet Rourke who is about to deploy and whose wife is expecting a baby. As if his fate as an expectant father in a dangerous action film wasn't clear enough. We are treated to a briefing on the team's members that doesn't do much other than let us know there are more than the two main guys and then they are whisked away to various corners of the globe to to rescue a captured CIA agent, fight a drug dealer, and defeat a mad Jihadist (their words, not mine) and his rag-tag team of suicide bombers.