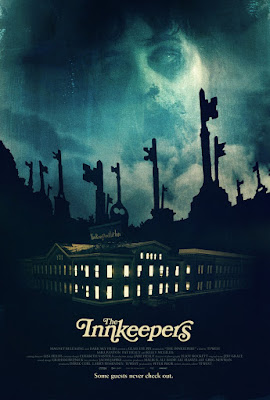 While I haven't seen any of his films, I hear director Ti West is an up-and-comer in the horror world off of his Cabin Fever 2 and The House of the Devil. And while the occasional one may, I have long since given up on the notion that a movie can "scare" me. Yet, I applaud those filmmakers who intend to create new horror films to at least attempt so long as they have the basic tenants of film making covered. As such, even being an original concept, The Innkeepers fails on pretty much every level.

Upon re-reading #pbf's review of The House of the Devil, it seems that West has a particular method of filmmaking in mind: a slow-burn callback to horror movies from decades ago. There are a lot of elements in Innkeepers that seem out of place in the modern film society: very contained cast of half a dozen or so, creepy locale, minimal technology, and a seemingly gradual buildup to the scares rather than a steady pace of false jump scares and such. Writer and director West though seems to set up the first half of this film perfectly for a shocking reveal or twist but forgets somewhere along the way. Instead, the majority of the movie flits along of the precipice of almost-scary before settling down into meandering bullcrap.