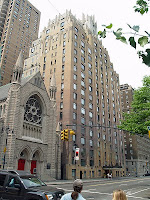 Ghostbusters 3. Let's make this happen. I want this to happen so bad, that I would cross the streams. Well, what's the hold up? Well, for one, Rick Moranis won't do it. Also, Sigourney Weaver keeps flip flopping (see Rick Moranis link). And as you can see, via the same link again, appranently, there is no confirmed director, either. Here, however is an interview with Ernie Hudson with a bit of info in it, stating that Ivan Riteman has confirmed it will happen and mentions when shooting will begin and when the movie will be out. I love this franchise, even with the second one being stricken with the Weekend at Bernie's Effect. While I have read some interesting and even good ideas for what the 3rd one should be about, I will not weigh in with my opinion on that. I will leave that to the professionals. I can say that I would rather not see "new ghostbusters" being handed the keys, as it were, but I understand that people are older. So if it has to be done that way, hopefully it will be tasteful. And can we not cheese out at the end with some random Jackie Wilson song that everyone sings to combat the "bad feelings?" That was a bit gay.
Posted by peanutbutterfilthy at 11:23 PM 3 comments:

I give up. Hollywood seems to be determined to weed out any original thought or story for the prospect of something that may yield a large box office take. Word is that Dimension Films is planning a remake to the remake of the 1979 original Amityville Horror. This movie not only spawned other haunted house rip offs but also several sequels in addition to its aforementioned remake.

It would seem that the window to remake a film is shrinking rapidly, much like the theater-to-home video window did as DVD gained acceptance. With the exception of new versions of previous foreign language films, an acceptable timeframe to remake a film was between 20 and 30 years if not more. The original zombie film took 22 years to be remade into color. One of my favorites, The Thing was a quasi-remake of a film 31 years previously. At that rate, the National Lampoon's Vacation series, Lethal Weapon, and the Police Academy series are all overdue for reboot city.

But wait! Why wait 20 years for an audience to forget a story when we can just go half of a decade? It already happened with the remake/reboot (what's the freaking difference anyway) of Hulk and possibly Superman too.

"I'm Going to Set the Building on Fire." 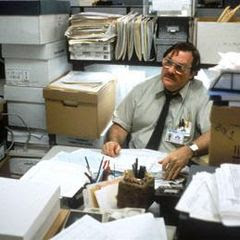 Stephen Root is hilarious. You probably do not know his name, but you have seen him before, or at least heard his voice. Seen here, he is Milton Waddams in Office Space, possibly one of the funniest movies ever, definitely not suffering from the Weekend at Bernie's Effect. It was based on a Satruday Night Live animated short of the same name, created by Mike Judge. The SNL short actually focused on the Milton character, whereas the movie had him as more a supporting character in a few scenes to break up the hilarity with more hilarity. Speaking of Mike Judge, Stephen Root is also on King of the Hill as Bill, also created by Mike Judge (and Greg Daniels of the Simpsons). He has been in almost everything from Ghost to Seinfeld ("I think it's pine."). You will no doubt remember him from News Radio, as Jimmy James. I did not start watching News Radio until it had been on for a while, but I found it really funny. I mean, look at the cast: Andy Dick, Dave Foley, Phil Hartman. Hell, even Joe Rogan was funny. I just wanted to give a shout out to Stephen Root, as I think most people do not realize who and just how funny he is.
Posted by peanutbutterfilthy at 4:44 PM 1 comment: 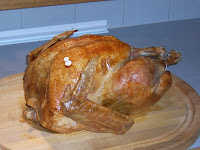 Now, I understand opinions are subjective. What I like, you may not. That's fine as everyone is entitled to their own dumbass opinion. With a lame attempt to tie into Thanksgiving, MSNBC gives us their readers' choices of movies that are "real turkeys."

Pulp Fiction!?! Blair Witch Project!?! These two films, whether you like them or not, are two very influential and important films of the 90s. While neither would be on my top 10 list for Best Movies Ever, it seems rather egregious to couple them with such dreck as Battlefield Earth and Showgirls. Even Battlefield, the cinematic equivalent to diarrhea, doesn't even rank on IMDb's Bottom 100 Films, a list comprised of internet participants I trust much more than those of a cable news network.

Have these people not seen the horror of film on an average episode of MST3K? Or the final installment of the Police Academy series? Or Weekend at Bernie's 2? Again, I know opinions vary, but these people apparently need to watch more movies. 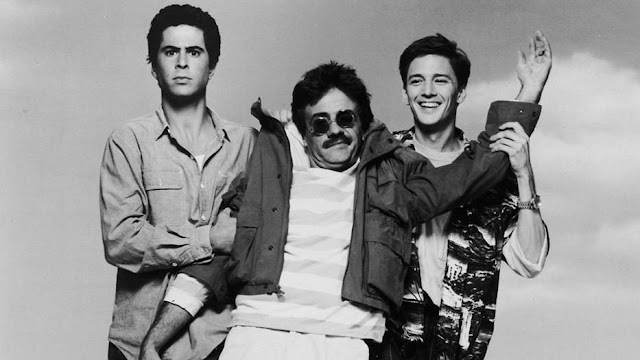 So I figured that I should, and later confirmed by Puck that it may be a good idea to, explain something about me.

I HAVE AN UNNATURAL OBSESSION WITH WEEKEND AT BERNIE'S.

I should first say that I realize that this movie is complete garbage and in no way aesthetically redeeming. Though I am a lover of fine cinema, there is room for fluff in my life, as there is with most people. I have a small collection of these on my DVD shelf. Some examples are: The Gate, Real Men, Joe Dirt, Friday the 13th Parts 5-8. But Weekend at Bernie's is different from the rest. What is it? Is it the hilarious premise of a dead man being passed off as alive for an entire weekend? No. Is it the Lichtenstein in Bernie's house at the Hamptons? Nope. Is it Tawny's fine ass exposed? Well, not entirely. Quite simply it is the pairing of Andrew McCarthy and Johnathan Silverman. Any scene of this movie that has the 2 of them bantering back and forth is some bizarre artwork, much like the aforementioned Lichtenstein. The combination of Silverman's stereotypical neurotic hyperdriven to success Jew and McCarthy's slacker, booze and sex crazed underachiever is like Reese's peanutbutter and Hershey's chocolate. Watch them! I honestly believe that they tried to pass dead a man as being alive for research!

Now, some of you will try to explain to me why no one should like this movie. You will say things like, "That dead body would have been a bit gamey after a few hours and especially after being wet, and being in that heat. Someone would have noticed." "I don't believe that that was an organized crime family for a minute, they were quite dullards." "Just because Bernie had a smirk on his face, doesn't make it funnier." Yes, yes, we can all point out the terrible inconsistencies, horrible editing and everything else that was wrong with it. But I have not seen the film over 100 times and have it memorized for the plot. It is for the brilliant back and forth between Larry and Richard written by Robert Klane that the plot was sacrificed for.

I may in future posts refer to the "Weekend at Bernie's Effect." This can have a couple of meanings:

1. Movie that although vastly inferior, will be playing in the background, or may even be watched anytime it comes on (i.e. Just One of the Guys, Police Academy 4). "Why are you watching Police Academy 4?" "Fucking Weekend at Bernie's Effect."

2. When 2 actors are really funny and basically are the only reason why a film is watchable, ala Johnathan Silverman and Andrew McCarthy (i.e. Jim Belushi and John Ritter in Real Men). "What is this, Real Men? What are you, retarded?" "Naw, dude, check out Belushi and Ritter. Totally have the Weekend at Bernie's Effect going on."

Please bear in mind that my obsession stops here, and does not continue to it's lifeless sequel (see what I did there?!). Not even Johnathan and Andrew could save it, and is what probably shelved the planned 3rd installment. That was just greedy.
Posted by peanutbutterfilthy at 7:42 PM 1 comment:

Welcome to the best movie website based around aggregating internet news, podcasts, and reviews created by two chaps currently in Virginia ever!