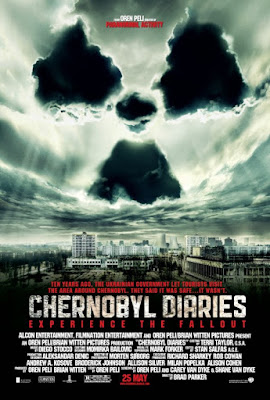 Chernobyl Diaries is basically The Hills Have Eyes. Except it sucks. Although, the premise is interesting and believable; too bad the writing and acting ruined all of that.

Chris, Amanda and Natalie (Chris's girlfriend) are travelling through Europe. They see all the usual touristy stuff then head to Kiev, to visit Paul, Chris's brother. After that, they plan to visit Moscow. However, at breakfast, Paul describes something called "extreme tourism," which, as soon as he said that phrase, I imagined some twenty-something slamming a Mountain Dew and exclaiming, "I saw the shit out of Big Ben!" As it turns out, extreme tourism is simply a flashy term for touring places that one would not think of touring. For example, Chernobyl. Paul met a gentleman named Uri, who runs such a service and he describes it to the others. They are reluctant at first, but via Paul's charm and whimsy, eventually agree to go. Two others, Michael and Zoe, join them on the tour. They arrive at the town where the families of the worker's once dwelled and are turned away by the guards. Uri finds another way in that is unattended. The group's interest and fascination increase as they explore a lake and empty buildings, but after a bit of a scare, decide it is time to go. Only the van will not start. Then all kinds of crazy Russian ghosty things start to occur. 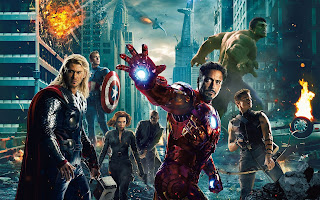 The general consensus was that The Avengers could not work as intended.

Granted, Marvel Studios did their best in establishing the four main members of the group with their own films that were mostly pretty solid in their own right, but how can one film fit so much backstory, sarcastic quips, and charisma from the assembled team without it being six hours long? Enter Joss Whedon to write and direct it, complete with his own built-in cult of crazed fans even though his output has never included anything of this size or scope before. I can't say I am a rabid fan of Whedon, only because there are many gaps in his resume that I have not seen. Nonetheless, he seemed like a perfect choice just from the goodwill the internet has for him as well as the properties of his I have seen (like the completely awesome Cabin in the Woods).