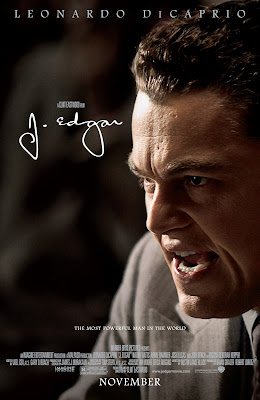 Certain movies just scream for attention and Academy Awards because of the pedigree of cast and crew or their subject matter. If you recall, this was my main issue with last year's Best Picture winner The King's Speech. Yet, even though some films have the requisite check marks on the Best Picture to-do list, they fall between the cracks. Such is the case for J. Edgar. Directed by the award-winning Clint Eastwood, starring the award-winning Leonardo DiCaprio, and written by the award-winning Dustin Lance Black, this should have been a shoe-in for every award that Oscar could throw at it. This was not the case as it is a mostly entertaining tale but nothing showcasing great cinema.

J. Edgar Hoover undoubtedly is a prominent figure in United States history and it is rather odd that a theatrical feature about his life has only just been made (not counting the appearances in other films or the Treat Williams' TV film). Good or bad, his name still stands upon FBI headquarters and his contribution to the criminal justice system is more than all four Law & Order series combined. But as historical information shows, Hoover was an interestingly complicated man in his pursuits of truth and justice, all the while trying to uphold the sovereignty of the United States. Sadly though, while Eastwood's film touches upon these moments here and there, the rest is bogged down into questionable historical claims and silly love quarrels.