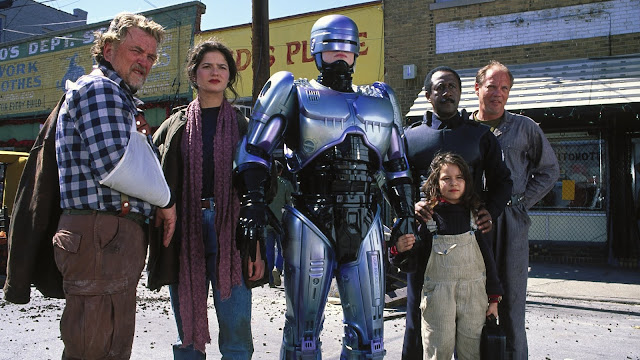 Somewhere between Peter Weller deciding to hand over the RoboCop suit to Robert John Burke, the big wigs at OCP, or whatever big business in charge, decided that RoboCop needed to be more family friendly, thus leading to the first PG-13 film in the series. Never mind the fact that the original is a gory mess, even for an 80s movie, and the sequel probably expended more rounds than the Persian War, some damn parental board decided RoboCop should be a corporate product complete with action figures and cars and even it’s own spin-off TV show not too much later. Hence: RoboCop 3.

Since the last installment, old Detroit has gone to shit even more, OCP has merged with some Japanese company, and a military-esque team is brought in to force them damn ghetto people out by force for the construction of OCP’s idealistic Delta City. Luckily the ragtag team of CCH Pounder, Stephen Root, Daniel von Bargen, and a cute, smart displaced girl with uncanny computer skills decide to fight the proverbial power. While Lewis is in hot pursuit of the van of ne’er-do-wells, she gets cornered by The Splatter Punks, which appear to be some rock band in pursuit of another hobby. Of course Robo comes to the rescue with his newfangled detachable arm that fires an automatic machine gun. And naturally, his insubordination doesn’t go over well with boss Bradley Whitford (what, there are a shit load of decent people in this movie) who wants the Murphy-part of Robo erased.

In spite of Lewis’ selfless act of heroism (which damn whoever was responsible for killing Nancy Allen), the mercenaries close in the on the remaining survivors and with Robo suffering damage in the attack, he is off little use … until the little girl why uncanny computer skills comes to to the rescue with Doctor Lazarus and her mystical power. But even that is little use until the Japanese send katana-wielding robots to clear things up.

All in all, RoboCop 3 wasn’t as bad as I remember even if poor Frank Miller’s script got butchered again. The concept of a decrepit and bankrupt city (shocking for Detroit, I know), mercenaries who don’t give a damn about collateral damage, and those that are willing to stand up against BIG GOVMINT, there are a lot of positive ideas to come from this. But RoboCop driving in a pimped out pink Cadillac, a cheesy CGI scene of Robo flying on his jet pack, and the little computer illiterate girl saving the game really sticks out as quite silly to a series that had hands, arms, and other innards strewn about to attack a bigger audience than previous. At the very least, maybe it’ll be better than the reboot.

P.S. How the hell did all of these otherwise quite talented actors get roped into this? A better starting script? Gas money? If I ever see Stephen Root, that’ll be a question I ask, as well as about the red Swingline stapler.
Posted by Puck at 4:35 PM No comments: 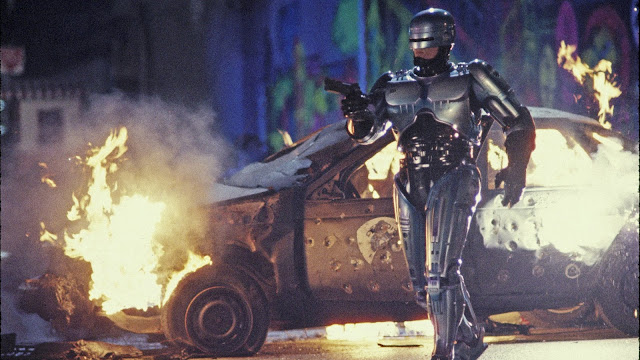 It’s almost funny that Irvin Kershner, director of the undisputed best Star Wars movie, was tapped as the director of RoboCop 2. While I can’t say I’ve seen any of his other works, he seems to be the studio-appointed and restrained errand boy as opposed to Verhoeven on the original. So naturally with the law of sequels, RoboCop 2 features most of the same players but with a bigger foe in the titular character.

Stripped of its social and historical allusions, RoboCop 2 is just another sequel that attempts to up the ante with less else new to offer as the evil conglomerate OCP attempts to recreate RoboCop from a psychotic drug dealer. Surprisingly things don’t work out as planned which fortunately leads to one of the best police shootouts on film. But instead of the heroic journey that Murphy endures in the original, here he is sidelined and neutered. Even though the finale of the last film had Peter Weller’s character realizing he is more than simply a corporate product of destruction, there are scenes that contradict that simply to add some sort of character arc as Weller again announces himself as Murphy at the end.

Other than the unnecessary complications with RoboCop’s programming and the quite idiotic creation of a drug-hungry 2 ton machine, RoboCop 2 falls into the trap of a sequel that adds little else. Co-screenwriter Frank Miller reportedly had bigger and presumably better ideas for the sequel that were deemed “unfilmable” so this is the best we got in the three years following the successful original. At least it isn’t as bad as RoboCop 3 to my recollection.
Posted by Puck at 4:29 PM No comments: 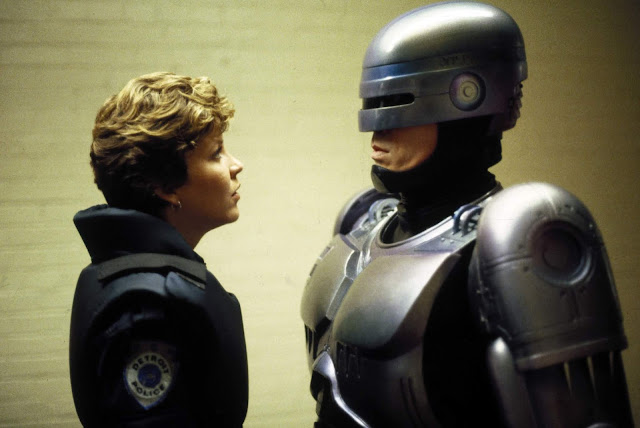 With the release of the newest RoboCop reboot trailer which I must say has me intrigued, I wanted to officially revisit the original of which I've seen approximately 413 times.

While the argument can be made for just about any remake, RoboCop is one of the few "old" movies that has more cultural relevance today than it did upon it's release. Big conglomerates, similar to OCP, are basically running the United States; the city of Detroit is bankrupt and probably will snap up any corporate sponsor it can, and between drones and the NSA and everything else we know nothing about, technology seems to be far outpacing our ability to harness it. If it sounds like I am paranoid, I am (not really at least). But basically all of this was foretold twenty-six years ago with arguably Paul Verhoeven's most complex film, excluding Jesse Spano in her Showgirls stage.

Much like many of the age-inappropriate movies I consumed under the age of 10, the themes and allusions of the film went completely over my head. I just liked matte-black Ford Tauruses, RoboCop with his spike finger, the awesomely ineffective body armor the police officers got and the great chemistry and performances by Peter Weller and Nancy Allen. But beneath the surface is a damning look at the callousness of big corporations and the inherent flaw of capitalism (in that someone always gets screwed) as well as the comparisons of RoboCop to Jesus. The latter of these themes struck me as wild when I read it years ago but it makes perfect sense as Alex Murphy was a decent man, killed and then resurrected, and turned on by his "creator."

But aside from all of that fancy stuff, RoboCop is just as sharp and impactful today as it was upon its release (especially the unrated cut). It has all of the standard 80s action staples of well-defined heroes, big baddies, and oodles of violence. While the new RoboCop remake/reboot/whatever will probably not come close to the sheer awesomeness of the original, I feel safe in knowing that RoboCop '87 will survive the test of time to become one of cinema's defining films.
Posted by Puck at 3:54 PM No comments: