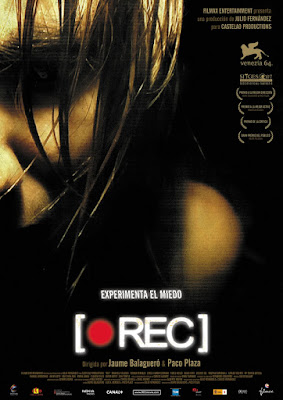 Also contained within is a quasi-review of Quarantine.

For all intents and purposes, I have seen [REC] before by way of its almost shot-for-shot and beat-by-beat remake Quarantine which was in production before [REC] was even released. Apparently, the producers used a shooting script for the basis of Quarantine so many of the scenes, reveals, and mayhem all run in conjunction if you were to play the two films at the same time. Having not seen the remake of Psycho, I cannot say how this approach worked before but I would imagine that experience was as bizarre and fraught with deja vu as watching the original film to one I had seen before. Even with it being almost two years since seeing the Americanized-remake, many scenes, shots, and even scares were predictable but still some were not. Largely though, this did not hinder my enjoyment of the film one bit.

The film carries with a frenetic, cinéma vérité-style in the same vain as The Blair Witch Project, Cloverfield, and its ilk to sell the documentation of an real-life extraordinary event. Here, reporter Angela Vidal and her cameraman Pablo shadow a group of firefighters as they attempt to rescue a frantic, screaming woman trapped in her apartment. It doesn’t take long for the Angela, the emergency personnel, and the residents to realize that things are amiss as not only are they sequestered inside the building by threat of deadly violence but the inhabitants start showing the undeniable zombie-esqe symptoms of rage and destruction. Yes, Virginia, those are quasi-zombies not unlike those in Zombieland or 28 Days Later.

As a straight out horror movie, [REC]’s greatest strength lies in its unpredictability as the events that unfold are so rapid-fire that you barely have time to digest the previous onscreen events before some other crazy shit happens. Even having seen the story before (with very minor tweeks from my previous recollection), some of the shocks and jumps are literally out of nowhere as the situation spirals further and further out of control. The entire hand-held method of filming removes you from the safety of watching “just another horror movie” and pulls you into the fear that this is for real. Being that this is a Spanish film, you are not going to recognize the actors which further solidifies the weight of the events unfolding, even if you have just the slightest voice in the back of your mind to reiterate that this is just a movie. The entire cast from Manuela Velasco’s Angela to Ferran Terraza’s tough-as-nails Manu ground their performances in the story, jettising any semblence of a “just-an-actor” notion you might otherwise have. All of the residents, police officers, and firefighters act in the same manner that you or I would in a similar situation: cut and run and to hell with everyone else.

Now, as opposed to the other recent “found footage” zombie film, Diarreah of the Dead, which was so painstakingly framed and perfectly shot that totally removes you from the narrative (not to mention those damn, annoying ass kids), the camera work is literally all over the place here. With climbing many flights of stairs and running through dark and treacherous corridors, the camera, and thus your eyes, are never really fixated on a single thing. There is bouncing, jostling, and static in the video which would very likely occur in such an ordeal. Rather than the dickish and superficial motive for the main dude in Diary to keep filming in the midst of crisis, Angela and Pablo have a legitimate reason not only to document the happenings inside the multi-unit apartment building but also to highlight the complete disregard for their safety by the militant force keeping them in the building. Now, at a certain point, a logical person would drop the damn camera and run for their lives but their decision to stay focused on the documentation of the events pays off in the nail-biting final few scenes.

It is unlikely that the world will experience events as portrayed in a zombie movie so certain irrational and downright self-destructive behaviors by the characters can be forgiven. But, as this is a movie after all, writer/directors Jaume Balagueró and Paco Plaza unfortunately throw in some incredibly baffling plot points, narrative choices, and generic horror clichés that try to sabotage the overall strength of the film. You would expect in a lazy zombie film for someone to approach an obviously infected person gently and turn their back to allow carnage or for a random character to carelessly stand in front of a glass door, behind which is a person who has been bitten but these things seemed out of place here. And even more infuriating, the story comes to a screeching halt twice (TWICE!) for the purposes of exposition, one of those times being in the aforementioned nail-biting final few moments. Quarantine modified the story enough so that these particular grievances were minimized but their inclusion was disappointing to say the least, especially considering that a sequel has been made (and was likely was conceived fairly early) to appropriately address the origin of the infection or to survey the aftermath.

Regardless of these quibbles I had with the film (and they were very minor especially due to the break-neck pace of the rest of it), I can almost guarantee that even the most jaded horror fanatic will find something to like in [REC]. If you’ve seen Quarantine, there really is not too much different here for a casual viewer to warrant a viewing. For the rest of us, here we have a genuine experience of unknown actors facing unknown threats (seriously, the cameraman in Quarantine was on The Practice) that is sure to lead into a fantastic sequel taking place just moments after the conclusion of the first.
Posted by Puck at 4:14 PM