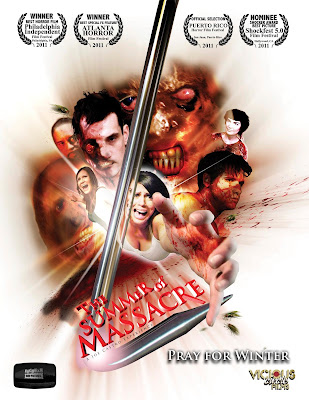 The Summer of Massacre will arrive on DVD and Blu-Ray on January 10th 2012 via Breaking Glass Pictures. It is 5 stories so bloody; so full of carnage that it is apparently in the Guinness Book of World records for highest body count recorded in a film. I am too lazy to verify that, so, you know, go ahead and Google or Wikipedia that. Whichever one you use to tell you what to believe.

You ever wanted to know what it would be like if Clive Barker took mescaline and then made a film? Joe Castro provides us with a pretty good guess. This film is ultra violent about 98.7% of the time. We have 5 chapters of dizzying images, ear piercing sounds and nonsensical industrial house music, and blood flowing like urine from a pissing contest atop Mt. Everest. I mean if something or someone could bleed, they did, as if their lives depended on it (!).

Chapter 1 is called Rampage. A man is beaten severely while jogging through a park. A woman finds him still alive and calls the police. He jumps up and slaughters her, splattering blood all over the camera and everything else in the area. He then goes around town on a killing spree like one might go on a shopping spree at the local mall. Heads get squished, flesh gets ripped from bone, pointy objects get inserted in to various orifices. It’s quite a crimson delight, so long as internal organs laying out in the open is your type of thing.

Chapter 2 is is a delightful story about siblings called Lump, which is the nickname of a severely deformed hermaphrodite named Lori. Her sister is quite jealous of the attention she gets and takes her out to the woods with their brother and some friends. Lori’s sister pushes her (she is wheelchair bound) off of a cliff. When Lori doesn’t die, the others start to.

Chapter 3 is called Son of the Boogieman. Pretty straightforward. Years ago, a woman is raped by “the Boogieman” and has a child. Jessie (the son) and his mother have been hiding from him for 36 years. Somehow he has found them, and wants son to be just like father. Anyone that may come across his path is all but liquified.

Chapter 4, called Burn, has some familiar elements to it. Some young Christians sitting around a campfire, discussing a legend of murders that happened 20 years ago. Then guess, what? They get naked, smoke pot, drink beer and die.

The 5th “chapter” is told in between each of the other chapters. Three serial killers tell their stories not only devoid of remorse, but proudly as if earning straight A’s in a mass murder college program. After chapter 4 concludes, their story is also completed in the same style the previous were.

This film has nothing to offer but gallons and gallons of blood and entrails. Not that there is anything wrong with that, but don’t pop this flick in looking for any kind of acceptable acting, original (or even interesting) stories and certainly not gifted writing. It is gore for gore’s sake, and as over the top as it is, it takes itself quite seriously. So, if you want to see a brain ooze out of a skull, this film is just for you. The sad thing is, even the gore is cheesy and not that good looking most of the time.

It was a good choice to make this film in to 5 stories. If it tried to tell one narrative instead, I would have ripped my own flesh off.
Posted by Movie Scum at 9:24 PM