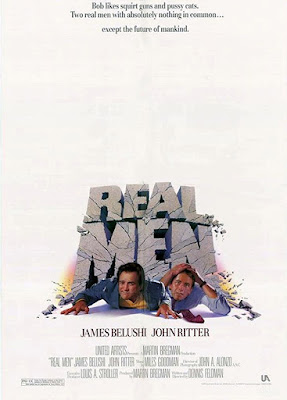 There’s a funny thing about Real Men. Almost every “review” of it mentions that every other review of it states that it is a bad movie, but that current reviewer disagrees. I have yet to find these negative reviews.

I will try to make this plot summary as simple as possible. It is quite ridiculous. Due to an accidental chemical spill that we only hear about, all life on Earth will be dead in 5 years. The CIA have been negotiating with aliens for years and it is discovered that those aliens have a “good package” that will reverse the process started by the spill. They also have a “big gun” that can destroy a planet. The good CIA agents want that package and the bad agents and Russians want the big gun. A rendezvous is arranged to meet the aliens and the good agents have what keeps being referred to as the vital map, that shows the meeting spot. The aliens require a glass of water for the package or the gun, whichever is decided upon. At the beginning of the movie, agent Pillbox, played by John Ritter is doing a run through of the meeting and is killed. Agent Nick Pirandello, played by Jim Belushi, is assigned to enlist Bob Wilson, who is also played by John Ritter, because he looks just like Pillbox and it is “too late to get anyone else.” Wilson is an insurance salesman, who lacks self confidence and is basically a loser. He is married and has 2 kids. Pirandello is a cocky, womanizing jerk-bag, but a damn fine agent.

This movie should not be any good at all. In fact, it probably isn’t. But it is just so damn funny. There is a scene where Pirandello first meets Wilson in his garage and is explaining who he is and what’s going on. Pirandello spends the majority of this dialogue assembling a gun out of items in the garage, such as a band aid tin, part of a vacuum, a wire hanger and a bunch of nails. This scene is one of the funniest scenes I have ever witnessed. Both Ritter and Belushi are very funny in this movie, Ritter playing more the straight man. They work very well with each other, much like another movie that pairs two comedic actors in a highly improbable scenario. It is this pairing that makes the film watchable as the movie ignores all logic and laws of plausibility. It is completely insane. Russians break for lunch during a shootout, Pirandello’s dad has a sex change operation in Sweden, there is a unit of the CIA called the Clown Unit in which bad agents dress up like clowns so that they are not recognized, Wilson runs around pointing his finger and thumb out like a gun yelling, “bang!” Then there are the huge plot holes: The Russians and the bad agents spend the movie trying to get the vital map from them, yet end up at the meeting spot and are waiting for them. Also, Pirandello states that they are giving the aliens the water in a glass with a presidential seal on it for “publicity.” He states the if the glass is seen around in space, it will be good for them. However, the alien gives the glass back. Oops. That aside, it is just a really funny movie that must be watched just to hear the clever banter between the two. Here is one of my favorite bits:

Nick: I’ve got some good news and some bad news.

Nick: There’s no way out of here alive.

Nick: It doesn’t look like we are gonna be here much longer.

I guess the point of this movie is to show you the transformation these two go through. Bob ends up being a hero, full of confidence and Nick ends up being a sensitive man in love. Yeah, I don’t really care about that.

You’ll have to keep in mind that this movie was made when the Russians were bad and sex change operations were only available in Sweden. So, when you see things like John Belushi’s hair, “don’t make a big thing out of it.” I cannot in good conscience categorize this movie as crap. It is just wicked funny, and so much so, the idiotic plot does not matter.
Posted by Movie Scum at 4:33 PM