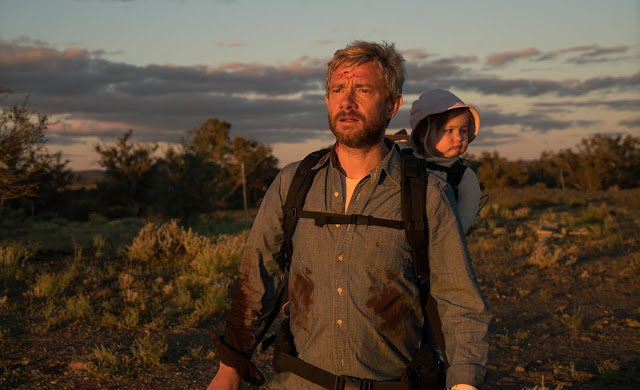 For being a zombie movie, Cargo is not so much about zombies as it is making peace with situations that cannot be controlled.

At the open, Andy (Martin Freeman) and Kay (Susie Porter) are lazily floating down an Australian river, vaguely speaking about troubles ahead courtesy of an unexplained zombie outbreak in the country. Andy is not quite cocky, but is at least too overconfident in what is best to do for his family, including infant daughter Rosie. Andy thinks staying on the rickety houseboat they acquired and sailing down the river is the best way to stay out of harm’s way, even though they are quickly running out of food.

When they run across a half-sunken yacht, Andy goes in to retrieve any rations left aboard but bails pretty quickly after a strange creaking sound comes from the bathroom. Once aboard, he tells Kay everything was fine and he was in no danger at all. Kay then takes it upon herself to board the vessel and get something for Andy as he managed to grab a bottle of wine for a gift. Kay gets bitten.

Andy is persuaded to go ashore after Kay’s injury even as he tries to remain skeptical it is a zombie bite. But after Kay begins to show symptoms of infection, Andy continues to seek help, against her wishes. Eventually, she dies and is proven right as her reanimated body goes after Rosie and Andy is caught in the middle. Now alone with an infant strapped to his back, Andy turns to whoever else can help him, and Rosie, survive, even against his conscience.

Based on the short film of the same name, Cargo expands upon its predecessor by giving a bit of backstory to the man carrying a baby in the middle of a zombie apocalypse. The short works like gangbusters so it doesn’t necessarily need those spaces colored in but the film takes enough detours away from the short that nothing is really spoiled or taken for granted. Early in the film, a young girl, Thoomi (Simone Landers) is introduced as she is dealing with the fallout of the current events but her story does not intersect with Andy’s until much later.

Andy starts the film with all of the answers and slowly comes to realize that he is ill-equipped for the world as it is. He finds threats to himself and his daughter under the guise of self-preservation but ignores the inherent danger and ethical conflicts as long as he believes it will keep them safe. It isn’t long before that safe haven is proven faulty and he sets out to find a group willing to sacrifice whatever is necessary for the safety of others, including Thoomi who he had previously abandoned.

Pride and hubris are dangerous emotions to have, especially in the midst of an apocalyptic event, but Andy eventually learns to let go of control, once he comes to terms that he does not have it. Without going into spoilers, the film ends similar to the short except Andy has accepted the help and guidance of Thoomi in order to keep his daughter safe. The final moments are kind of silly without being too overly sentimental as Andy leads his daughter and Thoomi to safety. It is similar enough to the short without giving everything way.

Going into it, I thought Cargo would be just another zombie/survival film with maybe a little familiarity to the short. But surprisingly, zombies are barely a presence in this movie. The effects pf the outbreak are shown, especially from the family Andy sees on the banks of the river at the beginning, but mostly this is about one man’s tale of survival and deciding what is best to keep his child alive under the circumstances.
Posted by Puck at 1:00 PM