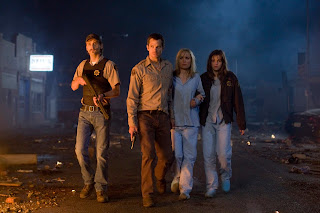 Just days after we release an episode criticizing the prevalance of remakes in Hollywood, this gut-buster comes in and proves that we should just have a big tall glass of Shut-the-F-Up Juice and give the film a chance before crying foul about its origins. In fairness, PBF and I commented that this looked like a rather kick-ass movie which we had high hopes for. I am happy to report, along with many other reviews I’ve seen, that it does not disappoint.

Based on George Romero’s 1973 original, Sheriff David Dutton watches as the denizens of Ogden Marsh, Iowa start going … well, crazy as you can ascertain by the title. Starting with a lone old coot gunned down on the baseball field after brandishing a shotgun, more and more people begin acting erratically and lashing out with extreme prejudice against their families and the neighbors. Before long, the entire town is affected by the water supply tainted with a military-grade biological weapon and all hell breaks loose when the military places the town under a quarantine. As David, his wife, and a small band of survivors attempt to vacate the area, they run across resistance from many different fronts. If all of this seems spoiler-ish, don’t fret. All of this is revealed in the first twenty minutes or so of the movie.

The mess that unfolds is so well paced and while it seems that it takes some time before the real threat is identified, the drama is slowly unfolding in the background. Rather quickly we go from scenes of an idyllic farming community to utter chaos. The lead up to the bulk of the film seems to speed by, leaving the rest to unfold very naturally as our gang of heroes tries to get the hell out of Dodge without being killed by the infected, the military, or some other random assholes. The story progresses quickly, but it feels very leisurely which allows the viewer time to absorb the horror of what is happening without a smash cut to the next scene. There is little if any footage of this movie that could have been excised and that makes every second on scene count so much more without all of the filler that normally accompany these types of stories.

Casting wise, everyone was top-notch. I am an unapologetic Tim Olyphant fan and I am happy that he has moved away from the quirky-but-weird supporting characters from previous films like Scream 2 and Gone in Sixty Seconds to an actor who can carry an entire movie. From the first scene after he guns down the first foe to the final frame, you can see the burden of not only the outbreak but of life in general. Hiding behind that worry though is genuine optimism which drives himself and the others throughout the picture. As his wife, Radha Mitchell serves as the voice of reason throughout the bleak situation but also as a woman who is tough enough to protect herself (save one scene) and give strength to others. Danielle Panabaker, probably the best thing about the Friday the 13th remake is sadly underutilized but still effective as the sympathetic kid dealing with the mayhem. And Joe Anderson, who looked remarkably similar to Ben Foster from 30 Days of Night toward the end, is fantastic as the deputy who may just be coming unhinged from the stress or he could be infected. Such as small core cast but that allows for a good dose of paranoia between them as the tell-tale signs of infection are not easy to detect.

To the uninitiated, this may seem to be just another zombie/infected survival movie, but the direction sets it apart, even from its equally good but still different counterparts. In a normal zombie movie, you typically have just one threat to deal with: the zombies. Here though, you have the infected (speaking of which, shouldn’t it really be called Infectedland?) who with no real warning or reason will use whatever is available to dispatch of anyone else, the military who are either trying to contain the virus or kill everyone in site, and the aforementioned assholes who usually pop up in this genre to up the ante a bit more. Imagine if you had a film like Outbreak or TV’s The Stand combined with a decent zombie movie and you have the overall idea. But where lesser films are blatantly obvious as to what will happen or who will die next, The Crazies is the most un-formulaic movie in recent memory leaving you with no idea of the turns about to come in the road. Above all, this movie is actually scary. Any movie can pull off the old startle routine occasionally (well, maybe not all) but the atmosphere of this film is tense enough that you are on edge from the production company logo to the ending credits. Having been horribly desensitized to fictional violence over the years, it is refreshing to see a movie that is not afraid to invoke the natural emotion during a horror film to its most extreme. This also leads to the knowledge that not everything will come out rosy for some, if not all, of our core group.

Really, I have very few issues with the movie and to share them here would spoil the greatness but they are so minimal and fleeting it almost feels silly to think about. In a world of PG-13 “horror” films, it is rather nice to know that The Crazies earned its hard R rating fair and square. It may be lacking in underlying social commentary (as I’m sure the original did, thanks Romero), but this is one hell of a movie that will shock you enough, you won’t even miss it.
Posted by Puck at 7:00 PM