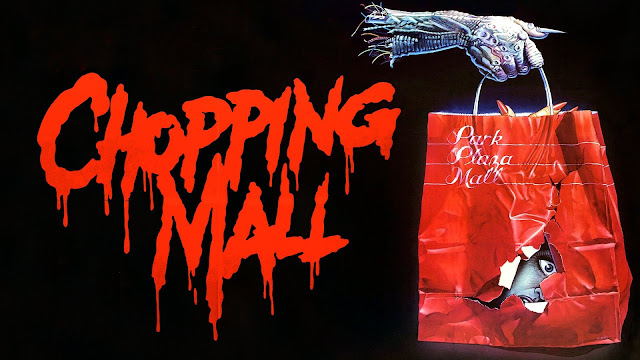 Even having seen the VHS cover for Chopping Mall more times than I can count, I never got around to this time capsule of 80s high-concept “horror” movies. No one will confuse Chopping Mall with high-art but it is a solid movie from its era that will make you wonder why they never made Chopping Mall 2.

Although the premise of a seemingly typical California mall spending ungodly amounts of money on automated patrol robots requires some healthy skepticism, the film does the bare minimum to sell this idea and then quickly moves on to meeting our soon-to-be deadmeat characters who are camping out in a furniture store ... for some reason. After a freak lighting storm (because of course) strikes the mall’s overly complicated robot control center, the “Protectors” come to life and ignore their gentle parameters and start savagely murdering everyone in sight. Like I said, it’s pretty great.

Being an 80s horror movie, Chopping Mall goes against the grain somewhat with its gaggle of sex-crazed teenagers. Aside from the requisite lunkhead and his bratty girlfriend (who are the first to go, natch), the others become quickly aware of the danger lurking and come up with some fairly inventive ways to dispatch of the mechanical maniacs, rather than simply sitting around and whimpering. The film throws a few curveballs with who lives and who dies in what order and even though we haven’t spent much time with these characters (aside from the survivors, I’d have to look up the rest of the character’s names), their personalities and traits are broadly drawn enough to make you sympathetic to them without the in-fighting or drama that typically accompany these types of films.

From the groovy 80s synth score to the practical effects to the gore and carnage of exploding heads and persons on fire (!), Chopping Mall is a fine film to revisit (or first time watch, no judgments here) for your cheesy-yet-good horror film. I’d be shocked if we don’t get a VOD remake in the next few years, maybe with a laid-off security guard sabotaging the robots in revenge. There should still be malls around for another few years, at least.