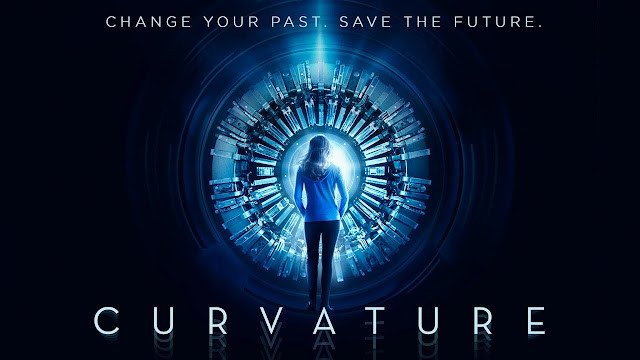 One of the key elements of a good mystery is immersion. It trumps a decent plot and interesting characters because the thrills are derived from a seemingly shared experience. As long as the audience feels like they’re solving a problem alongside the cast, they’ll go along with most anything. This does not include lackluster acting and an overly formulaic approach to storytelling…

Kenneth Seward Jr. is the Editor-in-Chief of United Front Gaming and a freelance writer for IGN. You can find him on Twitter @KennyUFG.

Diego Hallivis’ Curvature, billed as a sci-fi drama/thriller, follows the exploits of an engineer named Helen (Lyndsy Fonseca) sometime after the death of her husband. The apparent suicide has left her worse for wear; she sleeps on the couch, unable to go into her once shared bedroom. As a means of escaping her sorrows, Helen eventually decides to return to work. The goal is to take it one day at a time – being around colleagues helping bring about a sense of normalcy, if only for a few hours. Lingering questions about her husband’s death are magnified whenever she goes home but Helen seems to have a handle on things. That is until she wakes up one morning sporting new clothes and a bout of amnesia. Somehow, Helen has “lost” a week of her life. She didn’t sleep the entire time (the change in clothes and fact that she isn’t famished speak to that) and no fugue state or drunken escapade can explain away her apparent disappearance. If this isn’t bad enough, Helen immediately gets a phone call from a stranger telling her to flee her house. Good times.

From there, the film flows into a familiar groove. The audience follows Helen as she unravels each clue before stitching a solid conclusion together. For the most part, it works. Throw in some foot chases, near fatal accidents, and a segment where the hero must navigate a treacherous environment while avoiding bad men and you have the recipe for a compelling thriller. Unfortunately, Curvature starts to unravel shortly after the premise is laid bare. Not because of the acting; as a whole, the cast does a decent job. Lyndsy Fonseca is certainly believable as Helen. Even Linda Hamilton’s brief cameo should be well received. The overly formulaic approach isn’t an issue either. Though most will realize where the plot is headed early on, that alone shouldn’t necessarily deter viewers from sitting through the film. No, the main culprits are the script and convoluted plot.

One thing that the Curvature fails to do is immerse the viewer. This is in part due to the script and how it refuses to divulge critical information. Nearly every clue that Helen finds has to do with something that happens offscreen. A reference to a conversation that took place before the film’s start, items of significance made known moments before becoming a major plot point, literal inside jokes that the audience isn’t privy to – all of these things help in keeping the viewer in the dark of Helen’s plight. Interesting enough, the writers seemed to be aware of this fact. There are points in the film where Helen has to explain what something is (in relation to her world view) before also explaining why it’s a potential clue. Instead of showing how something the audience has seen earlier in the film is connected to a character, the protagonist gives a lengthy exposition on why a seemingly random object should matter.

The other issue stims from the film’s use of time travel. I won’t go into how it’s used, only to say that it isn’t needed to carry the plot. The “who done it” mystery would have been mostly the same without it as evident in how rarely time travel is actually mentioned in the film; it acts as a catalyst for many events but is kept in the background, only brought up to remind the audience that this is science fiction. And when I consider how the final story beats aren’t even possible – a problem most films/stories face when trying to manipulate time – I’m reminded of how unnecessary it was to include this plot device.

Curvature starts out interesting enough. It offers some nice shots (particularly one involving the inside of a rolling car), some decent acting, and believable drama; Lyndsy Fonseca should be pleased with her performance. It doesn’t take long before the film starts to falters though. Due to the absence of important information needed to build up a thrilling experience and the feeling that the writers tacked on a weak time travel angle, the film struggles to be mediocre. Curvature might be worth watching, sure. It just isn’t as compelling as its premise might lead you to think.

Editor’s Note: Thank you once again Kenny!
Posted by Movie Scum at 5:00 PM