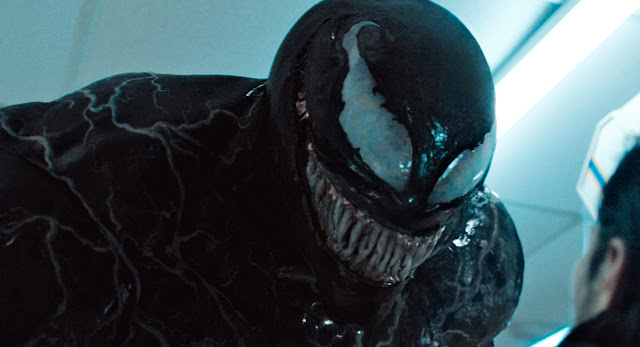 Earlier this week, Sony released the trailer for Venom, starring Tom Hardy with nary a Spider-man in site. I dig it, even though real critic’s reactions are decidedly mixed.

Now, I don’t know comic books and the only knowledge I have of Venom is from the wretched Spider-man 3, so the fact that this is a stand-alone film in the Spider-verse or whatever could be concerning to some folk. And while this film is possibly a left-over artifact of the Spider-man-verse from before Spider-man was rebooted again, I’m not going to hold that against this film.

Hardy plays Eddie Brock, a reporter in San Francisco (which of course is a ways from New York City) investigating some weird bio-company that is messing with alien-like organisms. Things go awry, the alien being becomes one with Eddie, and action and mayhem ensue.

As stated, I don’t know enough to care about lore or what this or any characters previously have done in film, comics, or even flip-books. The alien goop takes over Eddie’s body and has a mind of it’s own which will undoubtedly lead to Eddie saving the day and getting the girl in the end. So, I’m not too concerned with the minute details.

That said, Hardy’s accent is ... weird. I know he is English but I’ve watched plenty of films where he pulls off a convincing enough performance so I’m not sure what’s up with that. And the fact that the lab assistant lady says Sym-BYE-ote rather than the normal Sym-bee-ote is puzzling too. But, come on.

Hardy rarely picks bad roles. Michelle Williams and Riz Ahmed are also in it which only helps matters. And director Ruben Fleischer made Zombieland for Chrissakes so that has to count for something.

It is entirely possible Venom will be a steaming pile of shit at the end of the day. But honestly, when I watched the trailer on a lo-def Twitter feed a few days ago, I got excited.