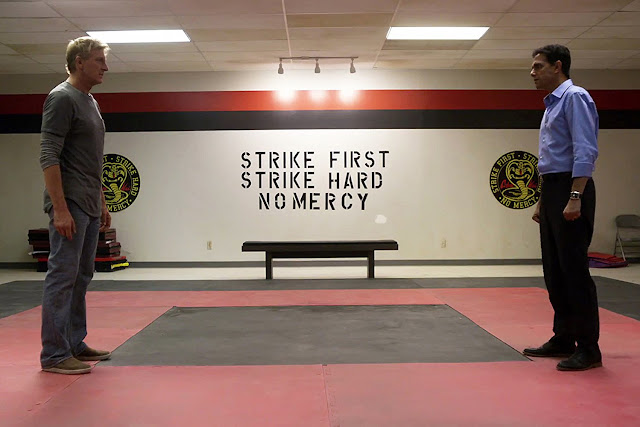 For anyone who grew up in the late 80s or early 90s, the Karate Kid films were a staple of your childhood. Now, the story continues and ... what the fuck, is Daniel LaRusso the villain here?

When a streaming continuation of the Karate Kid sage was announced some time ago, I didn’t pay attention; I was more of a Best of the Best type kid. But given the amounts of reboots and revivals these days, it didn’t seem too out of place.

And then that first trailer dropped. You know, this one:

That is one hell of a trailer and to be honest, it got me thinking about a temporary subscription to Youtube Red just to see how it plays out.

But then, the reviews started coming in:

This is the Karate Kid sequel I never knew I wanted, but am damn sure glad to have.

From the ‘80s hair-metal soundtrack to the frequent Karate Kidcallbacks, when it comes to aiming for our nostalgia sweet spot, Cobra Kai shows no mercy.

As a legit fan of the original trilogy (I actually think PART 2 is the best), I think“Cobra Kai”’s terrific, and I hope audiences embrace it.


Between Netflix, Hulu, the random cable channels and CBS All Access for reasons, I really didn’t want to subscribe to another streaming service.

But goddamn if that trailer and these review pan out, Youtube Red sounds worth it. On my hiatus in the next week, I will try to sample a few episodes and give you guys an idea of how it is.
Posted by Puck at 7:00 AM