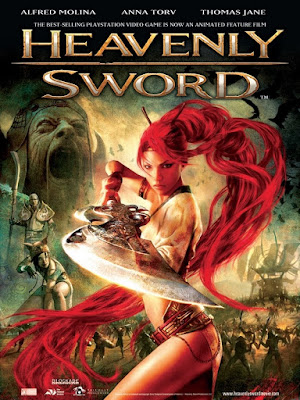 There are not too many positive examples of video-game-to-film transitions that you can point to. Some, like the first Resident Evil movie, are spun off from their console counterparts into a mediocre cinema treat that is begging to be forgotten after you’ve concluded watching it. Others are rancid piles of feces. Heavenly Sword: The Movie (based on the hit interactive graphic adventure!) falls more toward the former than the latter. It is not however without its own issues.

About six weeks ago, Kenny asked me to review this film. Having never even heard of the game before, I was reluctant to take part for fear that it catered solely toward those already familiar with the premise. Having read the film’s summary on Wikipedia, I realized that it did a fine job in conveying some of the more important points but due to the necessary truncation, some elements were not as fleshed out as I would have preferred. I blame Todd Farmer, writer of the interstellar juggernaut Jason X.

Heavenly Sword’s biggest flaw is surprisingly that it tries too hard with too little to fall back on. Consider what it would look like if you combined a modest-budget CGI film from the early 2000s with an epic, sweeping picture like The Matrix or Inception and you have already arrived at your final destination: this film.

Employing no less than three different animation techniques and a smattering of ill-placed narration to fill in the story’s gaps, Heavenly Sword is a movie in conflict with itself. On one hand, the structure of the story is as transparent and cliché-ridden that you will probably guess the majority of the ebbs and flows. On the other, director Gun Ho Jang uses quite skillful choreography and style to distract from the other shortcomings. In the end, you have a nice looking film, but one that is sloppily stitched together from standard movie tropes like the hero’s journey or seeking revenge without adding anything to the mix.

Fringe’s Anna Torv reprises her role from the game as the voice behind Nariko, the daughter of a great warrior and the general laughing stock of her clan who recognizes her skill but dismisses them because ... she's a girl. When their compound is attacked, Nariko’s father sends her out with the titular scimitar to find her half-brother, The Chosen One. It is he, and only HE!, who can wield the sword and defeat the advancing armies of the big bad, King Bohan (Alfred Molina). Bohan is the typical antagonist who wants the MacGuffin and will stop at nothing to acquire it, even if that means the senseless massacre of a few dozen people who apparently do not bleed in this world.

Nariko is paired with the plucky youngster Kai whose secret power is unleashing the power of a Gatling Crossbow in some of the film’s neatest sequences on her quest. And of course Nariko faces a number of big bosses at the end of the levels, err… sequences. And of course, you probably know what will happen to Kai. And you probably know what will happen when Nariko is finally reunited with the brother she never knew of, The Chosen One. If you do not, you need to watch more movies.

For as many sequences and scenes as this movie does right (which are a few, especially the boss fights), there are a number that are simply underwhelming. Without a slew of knowledge about the production of CGI-only movies, I cannot speculate as to why there are drastic differences in animation and shot composition throughout the film or even in the same scene.

One minute, I willfully embrace the dodgy animation and enjoy the rough and tumble fights. The next, I’m wondering who decided that literally taking a cut-scene from a video game and splicing it in would be a good idea. Likewise the score will go from epic horns and strings during a fight to staccato blips of an 80s synthesizer to a reaction shot. Bizarre is as close as I can get to describing it.

But, in spite of the (probably) shameless cash grab and questionable material, Heavenly Sword does hit the mark, especially as it pertains to Nariko’s journey. It is not shocking nor surprising nor anything new, but over the course of the film’s runtime, her spunk and determination do get to you, even if you can’t forget that the scene you are watching is basically Neo fighting the 100 Agent Smiths in whichever Matrix sequel. Only in better CGI.

Heavenly Sword is available on DVD and Blu-Ray September 2, 2014.
Posted by Puck at 1:09 AM No comments: